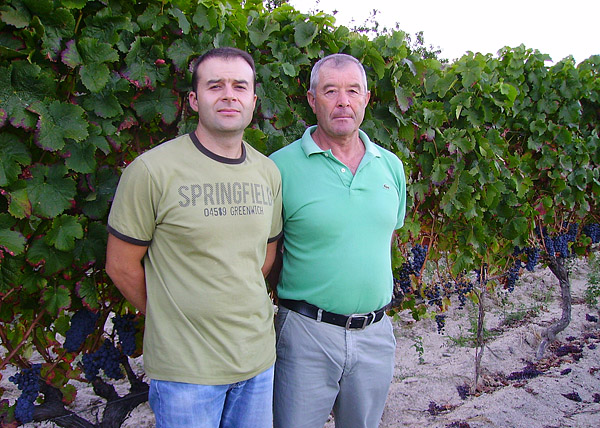 Castro de Lobarzán is a small family winery built out of the grit, sand and soil of their vineyards in the village of Villaza in the Monterrei appellation in Galicia, in the northwest corner of Spain. The grapes that go into their wines are 100% estate grown and it is easy to understand where their pride in their wines stems from.

First, from the outstanding quality of their mineral-driven, terroir-oozing wines. Second, from their part in preserving pre-commercial nursery clones of local vines, including saving the Bastardo grape from extinction in the area. And third, from their colossal efforts in Villaza that helped spark a resurgance of the centuries old wine heritage and tradition of the Monterrei section of Galicia.
[more]

It is believed that the Romans first brought vine cultivation and wine production to what is now the Monterrei Denominación de Origen. From the late ninth century onwards religious orders expanded wine production throughout the region.

During the Middle Ages, and through much of the modern era Monterrei had great economic, political and cultural influence within the wider region of Galicia and in Spain. Due to that influence and the quality of Monterrei wines, they were marketed along with wines from neighboring Porto to the Spanish colonies in the Americas.

Unfortunately, by the latter part of the twentieth century the vineyards of the region were nearing their demise due to Spanish economic isolation during the Franco era, abandonment of the land due to poor financial returns on agricultural work, emigration to urban areas, and the closure of the regional wine cooperative.

Castro de Lobarzán proprietor José Fernández Feijoó, helped by his son José Manuel, became important pioneers of a new era of wine production. In 1991 they started extensive work on their own vineyards, grafting clippings from the best and oldest vines in the area on their vines through massal selection.

These efforts led the way for the area and were buttressed by new, quality oriented European rules and investment in the wine industry beginning in 1994. Castro de Lobarzán showed that world class wine could once again be viable in the area and became an important part of this new era of winemaking that continues today.

Viticulturally Castro de Lobarzán employs green pruning and green harvest (very unusual in the area) to control yields. They limit yields to 6,000 kg/ha for white grape varieties and 4,000 kg/ha for red grape varieties. Yields are even lower for their top “IS” wines. All pruning and harvesting is done by hand. They use no herbicides or commercial chemical treatments.

Their winemaking philosophy is to employ as little intervention as possible in order to capture the typicity, personality and character of their extraordinary terroir.

It is because of their exhaustive and pioneering earlier efforts reviving the best clonal selection of vines in the area combined with their painstaking vineyard work throughout the year and careful vinification that their wines offer the outstanding quality we bring you today.

The name Castro de Lobarzán stems from Castro, a pre-Roman fortress village, and Lobarzán, which is the name of the Castro located on one of the hills that is part of what is now the village of Villaza.

The microclimate of Villaza is a confluence of Atlantic and Continental climates, featuring wide differences between day and night temperatures, a high number of hours of sunshine but with cool temperatures that help achieve excellent ripeness and good acidity without unhealthy conditions for the grapes. The first vines to achieve phenolic maturation are those on the slopes of Villaza, which tend to avoid the hazards of late september later ripening vineyards more frequently suffer.