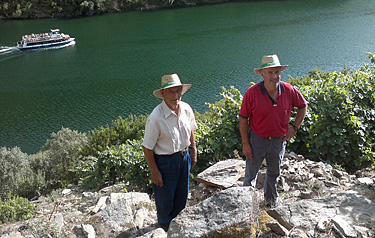 Borne out of centuries of vine growing tradition, Camiño Novo is a very small family owned winery in the heart of the Ribeira Sacra DO. Camiño Novo produces wine of immense character and natural purity from the top red grape of the region, Mencía. The core of the estate is seven very old vine (80-100+ years), steeply sloped, and stunningly picturesque vineyard plots along the Sil River, set in the most prestigious sub-zone of the appellation, Amandi.

Here the viticulture and Camiño Novo wine are bound in tradition. Here “tradition” is not a romantic nod to old ways long eclipsed by industrial agriculture. Here tradition is long hours of hard work by a father, son, and now his son tending the centuries old, terraced plots of their ancestors to make a humble, yet noble product, wine. As it happens their naturally oriented vineyard work and winemaking style perfectly coax out the character of their outstanding terroir in the glass.
[more]

Here the old ways are woven into the fabric of life. Carlos’s mother, Dorinda Diaz, makes their hearty Gallego bread, and joins with extended family to make seasonal savory chorizo and cured meats. They grow their own potatoes, and dig them up from a garden down the road. It is perhaps a simpler way than most of us modern city dwellers experience, with it’s own kind of richness in the flavors and savor of life as it has been for generations. But it is not an easy way either.

Carlos’s father, José Maria Diaz, now in his 80s, had feared the family vineyards and traditions were nearing their end when he could no longer manage the vineyards alone. However, Carlos could not let this happen, although he has his own family and a more citified job as a full-time teacher in a small city not too far away.

Instead Carlos spends all his free-time, weekends, holidays and vacation time tending the vineyards, along with his father and now his son. Extended family are brought in for the harvest and a harvest celebration.
The plots are located at varying altitudes and orientations, stretching from the town of Amandi to Doade. While the pint-sized winery itself is comprised of just a few stainless steel tanks and a mini bottling and labeling machine in the basement of the family house in the tiny village of Vilachá de Doade.

The vines range from 80 to 100 years old and many of the steep stone terraces, called bancales, are more than 500 years old. Vine cultivation along the Sil dates back to Roman times. Together the plots make up 1.6 hectares of vineyards of 98% Mencía and 2% Garnacha vines. The Garnacha adds acidity to the blend, and is another of the old ways of naturally maintaining balance without the interventionist practice of adding tartaric acid, which is often poorly integrated and can add an artificial character to the wine.

The soil in the central Amandi plots near the town of Amandi is pure red slate, and is the source of the intense minerality in the wine. Because of the wide width of the Sil in Amandi its vineyards are better ventilated than eastward toward the town of Doade, which helps maintain good vine and grape health. As you near Doade the soil becomes more solid slate, and the ventilation is also lessened because as the width of the Sil river narrows.

While common sense would indicate that humidity would be a significant problem along the riverbank, but rather heat at the lowest parts of the slopes closest to the river (with temperatures reaching as high as 113° F) becomes a big factor in terms of ripeness. The result is that the lower parts of the slope are harvested earlier with a riper character to the grapes. The vines are trained in trellis to help with better aeration and to avoid the skins of the grapes being burned by the sun and adding cooked flavors into the wine.

The wines are naturally made, in part out of necessity. The vineyard slopes can be more than a 70% grade in sections so that almost all of the vineyard work is done by hand, and sometimes with the help of donkeys—especially at harvest. No chemical treatments are used except for caldo bordeles applications after flowering.

The winemaking style is traditional and as non-interventionist as possible. Pure, rich fruit and well-balanced acidity that reflects the land is their goal. Considering the quality and age of their vines they could make a super concentrated modern style luxury cuvée (at even more minuscule quantities), but that is simply not part of the equation at Camiño Novo.

Simply put, Camiño Novo is a labor of love and tradition from a family’s own hands and their own hearts.