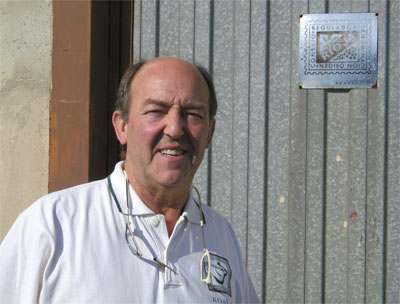 Basilio Izquierdo is one of our favorite winemakers. His knowledge, ceaseless curiosity and amazing problem solving abilities in winemaking are a wonder to behold. It also helps that he was the head winemaker at CVNE and Contino for more than 30 years and responsible for dozens of true classics that send Rioja aficionados to tears, such as the great “Imperial” and “Viña Real” Gran Reservas of the ’70s, ’80s, and ’90s, and the mythic Contino ’82 Reserva. Not to mention his understanding of many of the lost traditions of Rioja.

Simply put, Basilio is one of Spain’s most brilliant winemakers. In 2006 he started a personal project of his own, Bodegas Basilio Izquierdo, in a garage style cooperative winery space in the town of Laguardia within the Rioja Alavesa sub-zone of Rioja. His goal: to explore some of the lost art of Rioja winemaking in conjunction with his knowledge of the latest techniques and materials. In that first year his white wine production consisted of one new French oak barrel. Since then he has expanded to an annual production of about 5000 bottles of barrel aged red and 700 bottles of barrel fermented white.